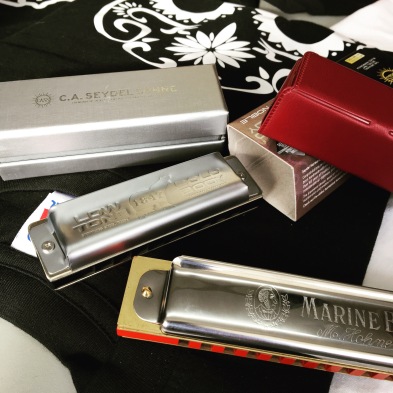 What do the two harps pictured above have in common? One is a 365 14 hole Marine Band in the key of G and the other is a Seydel Noble Low Tone in low G.

In the 1990’s Steve Baker developed the ‘Steve Baker Special‘ or SBS for short. Based on 14 hole 365 Marine Band harmonicas, and for those that don’t know, it was the laid out with the first 3 holes of a regular diatonic harmonica repeated on holes 4 to 6, then the rest of the harp carried on as a normal Richter tuned diatonic. The other way to look at it is that it it’s another three holes an octave lower tagged on the beginning of a regular harp.
Or just look at this diagram:

I managed to obtain a low G version of one of these beauties in the mid nineties from a deal Norman Ives did with Kevin’s Harps, who was the distributor for Hohner USA at that time. My harmonica teacher David Michelsen was a proponent of the chugging technique and made some crazy sounds with the low G SBS. The octave splits on the first 6 holes at the lower end of the harp lost their disjointed sound when compared to a regular 10 hole diatonic as they become true octave splits on the draw notes as well as the blow notes. Like a say, when mixed with chugging this made for a monster sound.

To start with these where just detuned Marine Band 365’s with a multitude of solder on the reeds to weigh them down and make the notes real low. Unfortunately I sold my low G SBS on ebay years ago and haven’t hankered after it since.

That was until I spotted the other little beauty pictured in the main image: the Seydel Noble Low Tone. Before the Bristol 2017 international Harmonica festival I had never seen one. I guess I just haven’t had my ear to the ground! I spotted it on the Seydel stand for a festival special of £55, a bargain for any Seydel harmonica, so I had to see what it was. It’s a lovely weighty chunky little number with coverplates that stand well proud of the reedplates to prevent the reeds hitting the inside of the coverplates when played. Windsavers cover the reedslots at various places to stop air leakage over the large reedslots and in place of old bits of solder are actual chunks of metal on the reeds to weigh them down to those low notes. The chap on the stall also told me that the comb is 1mm thicker than usual as it creates 20% more airflow. Is this true? I don’t know but it sold me! 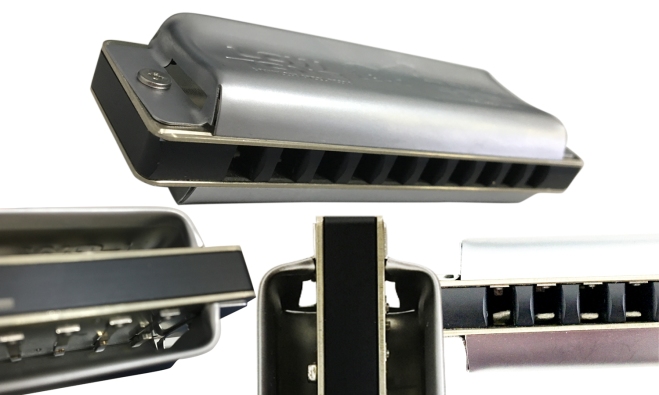 Pic above shows weighted reeds (bottom left) wide coverplates (bottom centre) and windsavers/valves (bottom right). As you can see by the main image the harp certainly is a chunky little number.

I have contemplated soldering the reeds of the 365 to make a low G SBS but I think I’ll leave it as it is and enjoy the extra notes. I think I’ll go and use my Noble low G more and more. The first thing I’m gonna do with that low tone is make some Cello type notes to go behind the guitars in the indie band I’m in. Then I’m gonna chug out some solo stuff ’till my little heart’s content! Brilliant harp.

One thought on “Feeling low…G!”

This site uses Akismet to reduce spam. Learn how your comment data is processed.